Judges 13 and the context 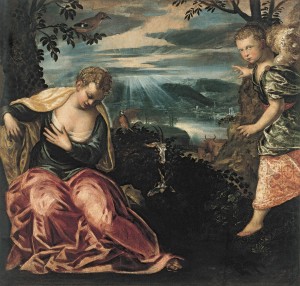 We are right when we complain that we live in bad times if we look at the world today. The Bible has a full understanding for the situation like that. The mother of the famous Samson in the Book of Judges lives in the time of 40 years ongoing oppression by the Philistines.
How many times do we experience ourselves as nameless among the people we live with and in the world around us? We miss recognition of our person and of our deeds. Samson’s mother is a woman with an important role in the Bible – almost like Mother Mary in the New Testament (see the painting: Tintoretto, Annunciation to the wife of Manoah,1555-1558, oil on canvas) – and yet she remains in the background, forgotten and unnoticed also in our spirituality. We do not know her name, the Holy Scripture doesn’t mention it.

The wife of Manoah

In the biblical story she is defined in terms of belonging. She is wife of Manoah (Judges 13:2). It is the relationship to her husband that creates her identity. She reports both times about the angel who came to her (Judges 13:6.10). She has a good husband who prays for both of them; she is present in his prayer: “Teach us, what we are to do!” he says (13:8). Her loyalty makes him follow her when angel appeared second time (13:11) – she is his leader.
Samson’s mother is to compare with Mother Mary because she understands the language of the angel; she is so attentive to the Word of God that she can communicate with him and perceive God’s message.
If we consider that Manoah recognized the angel only after the sacrifice (13:21), it seems that his wife was much quicker because from the beginning, in her first report, she talked already about the “angel of God” (13:6). She is the one giving wise and precise logical interpretation to comfort her scared husband (13:23).
Samson’s mother is in the list of biblical women who don’t have children – together with Sarah, Hannah and Elisabeth. This is their painful disadvantage which is for the Bible not kept in the secrecy. God’s messenger is immediately referring to it and this is where the work of God begins for Samson’s mother (Judges 13:3).

She is a woman who is invited to watch and keep guard about her nourishment (13:4). It is important what it is that will nourish her. The ancient and proven spiritual experience tells us how decisive it is what the food for our souls is. In Samson’s history this is a contrast to the way of seducing and driving him crazy which he will twice experience (“coax your husband!” Judges 14:15; 16:5). Samson’s mother remains sober and wise.
Her unity with Manoah is constant: They are together for the sacrifice (13:19). They are together when Samson is telling them about his first love (14:2) and when he brings honey (14:9). She is with her husband also when familiar confidence begins to fail: Samson does not tell them about the mighty deed of the Spirit (14:6) and where he had the honey from (14:9). He does not reveal to his father and his mother the solution for the riddle (14:16) which he will at last tell his crying wife (14:17).
The unity of Samson’s mother with her husband is a strong contrast to the seducing, false way of Delilah, who is three times pretending and calling him to trust her, while in fact she is working for her bosses and is looking for her reward (“Please tell me!” 16:6.10.13).

Mother until the end

Samson’s mother is similar to Mother Mary because she has to keep the memory of the angel and live out of it. The Scripture says: “the angel of the Lord did not appear again” (Judges 13:21) – so she had to “treasure these words and ponder them in her heart.”(Luke 2:19).
The biblical story of Samson does not explicitly mention the further role of his mother, but we can reasonable try to understand how her maternal heart feels when her son is following the judgment of his eyes (14:3 “she pleases me” in Hebrew “she is right in my eyes”) and when he finally falls as victim. What a sword pierced her own soul when she witnessed that he, who was meant to “begin to deliver Israel from the hand of the Philistines” (Judges 13:5), actually causes their attack (15:9)!
There is yet a great faith of this good mother, which – as it seems – makes wonder. When she reported about the first words of the angel and Samson’s special dedication to God she added “to the day of his death” (Judges 13:17). And it will be exactly on the day of his death that Samson makes final conversion. He is praying, he is for the first time mentioning God’s holy name: “Yahweh” (Judges 16:28). With his death Samson will shatter the fundaments of the enemy’s house; his death will bring greater victory than his life (16:30).