The spirituality of Mother Mary for today

The well-known biblical account about the wedding in Cana of Galilee shows how strong is the influence of Mother Mary. With her action she makes the disciples come to the faith in Jesus: “His disciples believed in him” – the Gospel says in the end. (John 2:11).

It is the person of Mother that causes that to the disciples at the beginning (John 2:2), there come brothers (2:12) of Jesus at the end. Here is already the power of the person who will afterwards remain in the midst of disciples in unanimous prayer for the Spirit (Acts 1:14).

It is her contribution in Cana, that – according to the judgment of the steward – the man brings forth the good, that he was keeping for himself until then (Jn 2:10). A mother makes it possible.

In a very practical thing she shows not only that she has an eye for the need of people, but also that her attentive heart recognizes in this everyday situation one opportunity to realize the Word of God. For her son Jesus she uses the words the Pharaoh said in the era of great famine throughout the country for Joseph. The people came seeking help and then they heard from the Pharaoh who has the rescue: “Do whatever he tells you!” (Genesis 41:55). The Virgin Mary at Cana recognizes in her son – despite his harsh response – the universal savior.

She is a woman for whom the angel said from the beginning that she is full of grace (Luke 1:28). Thus it is clear that a pure heart – which Master will later on declare blessed – is not an empty heart. She has found grace (Luke 1:30) – the angel said, pointing out where is the source of being full of grace. At the same time this is a proof that her search was successful.

This does not mean an exclusion of human emotions. The angel saw her fear – that’s why he said: “Do not be afraid!” (Luke 1:30).

To understand the language of the angel does not mean to have all the solutions and answers in advance. Mary was asking herself about what the greeting at the beginning meant (Luke 1:29) And it is in this reflection that a reflectivity begins, which is the nucleus of Ignatian spirituality and expresses such a simple and important truth: Not only in the Word of God, not only in the sacraments and miracles, not only by special enlightenment and personal revelation, but in that what happens to us in life, we can recognize the will of God. In our experience God reveals himself to us.

What Mary had started with the question about the greeting, she then continued by treasuring the events in her heart to ponder them (Luke 2:19.51).

To receive the message from heaven, to see God with the pure heart does not mean to have everything done. The mother of Jesus remained open to the future. The question: “How shall this be?” (Lk 1:34) is valid also for Bethlehem and Golgotha.

The mother’s heart is close to us because she knows the hardship of Caesar’s order, which make her go for a journey in the last days of her pregnancy. Can we compare it with what we sometimes have to suffer concerning the authorities and official matters.

The heart of the Mother is so modern because Mary knows the bitter conflicts, the disrupted communication and misunderstandings. Her bridegroom Joseph had his own plans and he wanted to leave her (Matt 1:19); she went away at the beginning of her pregnancy (Luke 1:39). Later on they were looking for their twelve year old son with pain for three days. What would it mean today if parents would not know for an hour – or even for a whole night – where is their child? And then the mother got an answer to her question which by itself causes a misunderstanding. When she said that she and his father were looking for him (Luke 2:48), she heard the strange answer that he should be with his father (2.49). Therefore, the heart of the Mother is prepared at Cana and the strange word: “Woman, what do have I with you!” does not stop her. 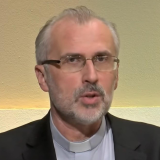